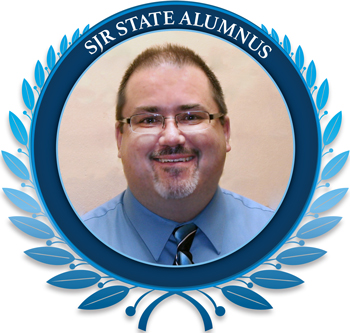 A love of music, singing and performing attracted Ben Brotemarkle to the Florida School of the Arts, where his introduction to history classes in music, theater, art and dance, as well as humanities, courses helped lay a beneficial foundation for him. “This early interdisciplinary approach to learning about history and culture served me very well throughout my entire college experience and career,” said Ben.

After receiving his Associate degree in music/voice performance from FloArts in 1983, Ben went on to receive his Bachelor of Arts in Humanities and a Master of Liberal Studies from Rollins College. He earned his doctorate in humanities and history, with a specialization in Florida history, from Union Institute and University.

Since 2008, Ben has been employed as the executive director of the Florida Historical Society (FHS), the oldest existing cultural organization in the state. “This position allows me to do all of the things I love most while promoting the history and culture of Florida.” Ben also appreciates that his work provides many travel opportunities throughout the state, expanding his participation in various cultural events. “My entire career has been focused on community service work for not-for-profit organizations and educational institutions,” he explained.

At FHS, Ben serves as the producer and host of “Florida Frontiers: The Weekly Radio Magazine of the Florida Historical Society” and the public television series “Florida Frontiers.” Both are broadcast on National Public Radio (NPR) and Public Broadcasting Service (PBS) affiliates throughout the state. Additionally, Ben has produced plays for FHS, including “Ponce de Leon Landed HERE!!” and “Female Florida: Historic Women in Their Own Words.” He has also written five books on the history and culture of Florida and edited many others for the FHS Press.

Prior to joining FHS, Ben worked in the field of public broadcasting in Orlando for 13 years and spent much of that time as the creator, producer and host of the weekly radio magazine “The Arts Connection,” featured on NPR. For eight years, he was also a full-time professor of humanities at Brevard Community College (now Eastern Florida State College), where he served as the department chair, and was named the Barnes and Noble College Booksellers Endowed Faculty Chair of Academic Excellence and Distinguished Educator.

Reflecting on his FloArts experience, Ben said, “The students at the Florida School of the Arts and SJRCC (now SJR State) were a very close-knit community. I'm still close friends with many of the people I met at school in Palatka more than 30 years ago. My wife Chris (to whom Ben has been married for 26 years) was one of my classmates at FloArts. One of my favorite memories from that time was performing in ‘Cross and Sword,’ the official state play of Florida, which FloArts produced in St. Augustine. I had multiple roles as a Spanish courtier, a Spanish soldier, and I sang the French solo in the show. Learning to sing in multiple languages at FloArts prepared me well for my fifteen years with Orlando Opera as a part-time professional singing actor.”

Ben recently returned to FloArts to give the commencement speech to the Spring 2017 graduating class. He advised the graduates to never stop learning and to stay focused on their aspirations. "Always follow your dreams, but don't be afraid to take the unexpected path,” he said.

Florida School of the Arts is part of the academic and administrative structure of SJR State and awards the two-year associate degree in the following areas of study: visual arts, stage management, dance, theater technology, acting and musical theater. The School serves the entire state of Florida. Admission is based on an audition or portfolio review, an interview with the faculty and admission to SJR State. Students produce and perform in approximately four visual art exhibitions and 10 performances each year. For more information about Florida School of the Arts, call 386-312-4300 or visit online at FloArts.org.