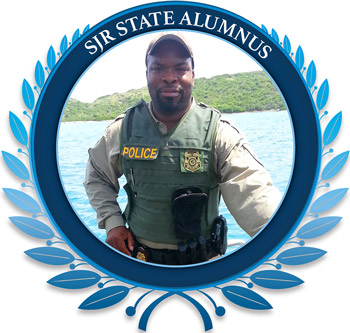 In his role as a federal wildlife zone officer for the U.S. Fish and Wildlife Service, Bruce Butler frequently travels across the country, from his home base in San Juan, Puerto Rico to as far as Alaska and the U.S. Virgin Islands. Bruce oversees operations for the uniformed leg of the USFWS. “We perform the primary law enforcement duties, including traffic stops, catching illegal aliens, and compliance checks for hunters and fishermen,” he explained. “We also enforce local and federal wildlife laws pertaining to fishing and the protection of wildlife species.”

Bruce first became affiliated with the USFWS when he was a congressional intern in Washington, D.C. and hopped on the wrong train there one day. About that fateful experience, Bruce said, “I met the chief of the law enforcement branch of the National Wildlife Refuge System. He gave me a brief introduction, and then I started as a student intern for USFWS in Atlanta, Georgia during my last semester of college. I enjoyed the job and the mission of the agency.” Following that internship, Bruce was offered a full-time position as a federal wildlife officer and later promoted to the position of zone officer.

Prior to Bruce taking off to other parts of the world, he earned the majority of his credits for his Associate in Arts degree from SJR State, thanks to a scholarship he received from the J.P. Hall Children’s Charities. He then went on to earn a bachelor’s degree in criminal justice from Florida A&M University. Bruce was certain he wanted a career in law enforcement but was “unsure of what level and where,” he said. However, realizing “there was a world outside of Clay County,” this Green Cove Springs native decided to spread his wings and take advantage of opportunities away from home. 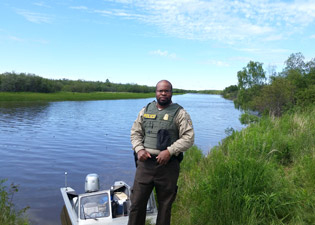 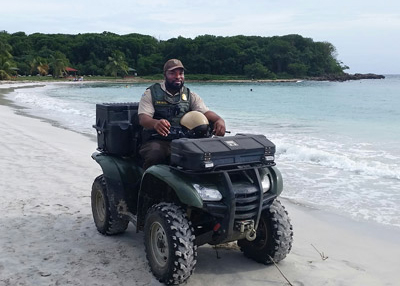 “SJR State helped me transition into the real world,” said Bruce. “The compassion of the staff and instructors at the College was helpful with that type of transitioning for a young person.”

Forever an Eagle Scout, Bruce is a lifetime member of the National Eagle Scout Association. Additionally, he volunteers with the FBI National Academy Associates, Inc., and the J.P. Hall Children’s Charities in Clay County. “I come home every year to support their annual Christmas party,” he said of the J.P. Hall organization.

In 2013, Bruce graduated from the National FBI Academy, a leadership/supervisory training opportunity in Quantico, Virginia for select officers from around the world. He earned 15 graduate hours from the Academy and plans to pursue his graduate degree someday, when life slows down a bit for him.