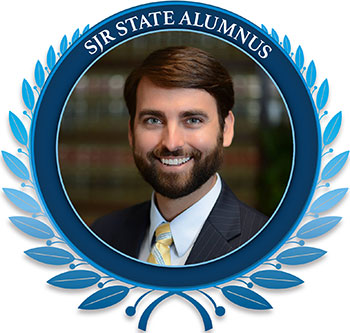 Each week, St. Johns River State College is honoring one of its own in an alumni salute, celebrating the career milestones, community contributions and personal reflections of those who began their collegiate journey as SJR State Vikings.

He then enrolled at UF’s Levin College of Law and graduated second in his class. In the legal community, Charlie earned a name for himself when he took on a case which was featured on ABC’s 20/20. While working as an attorney for a litigation firm in Jacksonville, Charlie fought for, and won, the freedom of a Texas man serving a life sentence for a parole violation.

He has since returned to his hometown of Palatka, where he has partnered to create the legal firm Douglas & Hedstrom, P.A. Charlie continues his passion for justice by serving as a civil attorney. He also holds Financial Industry National Regulatory Authority (FINRA) Series 7 and 66 licenses and co-founded St. Johns Asset Management, LLC.

Charlie enjoys giving back to the community through service organizations such as The Arc of Putnam County, Kiwanis of the Azalea City, Putnam First Cancer Fund, Boy Scouts of America and Haven Hospice.

Charlie speaks highly of his education from SJR State. “When you have professors who love their subject matter, you are constantly engaged,” he said. “That made for a great learning environment.”