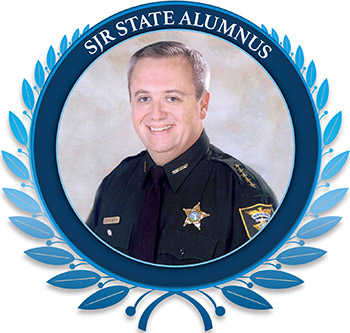 For more than 30 years, Sheriff David Shoar has kept his promise to serve and protect his community. After graduating first in his police academy class, Sheriff Shoar began his career with the City of St. Augustine, serving as a patrol officer for 10 years. He then decided to continue his education by enrolling at SJR State.

Since 2004, Sheriff Shoar has served as the Sheriff of St. Johns County, and in July 2014, he was elected president of the Florida Sheriffs Association.

Sheriff Shoar also supports the community through his work with charitable organizations such as the Betty Griffin House, EPIC, Project SOS, Leadership St. Johns, Concerns of Police Survivors, the United Way and the March of Dimes.

Sheriff Shoar believes that SJR State served as a catalyst for his academic endeavors. “The environment I experienced at SJR State helped set the stage for all my future efforts in the academic field,” he said. “I consider my time at SJR State as some of the most valuable I have spent in my professional career.”