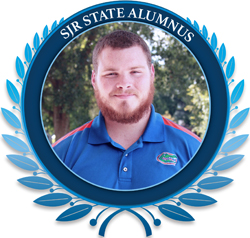 After taking many dual-enrollment classes at St. Johns River State College, Ernie “Bubba” Silcox said he knew it made sense to continue on the path to earning his A.A. degree. A year later, he graduated from SJR State and continued his studies at the University of Florida, where he earned a bachelor’s degree in history and a master’s degree in social studies education.

Today, Bubba teaches world history at Palatka High School. Did his time at SJR State influence his current career decision? “In some ways it did,” he said. “I had always juggled the idea of whether I really wanted to become a teacher, and some of the history teachers I had at the College inspired me to want to pursue that goal.”

Bubba credits his parents and Coach Sam Rick, the student activities coordinator at SJR State’s Palatka campus, for their ongoing support in his life. “Aside from the support my parents always gave me during my collegiate career, Coach Rick was instrumental in helping me reach my goals at the College and beyond,” Bubba stated. “Coach Rick was a great mentor to me during my time at the College and even to this day, long after I have graduated. His advice and outlook on life helped me as I continued my education at UF and even now, starting my first real job.”

While studying at SJR State, Bubba enjoyed working as Coach Rick’s student worker. Through that role, he has fond memories of assisting with the annual fall and spring frolics and other Student Government Association (SGA) events, as well as new-student orientations. “I was able to interact with tons of students, whether it was helping with registration, finding classes, or just playing a game of pool,” he recalled. “Also, being able to help plan and work on behalf of SGA for frolics gave me a better appreciation for the College and the work people put into making it great.”

In addition to his participation at SJR State, Bubba has been involved in many community service projects, including assisting with a canned-food drive for Bread of Life, a road-side clean-up for Adopt-a-Street, Circle K International and Kiwanis projects, and a food drive for the Southern Scholarship Foundation.

Bubba was inducted into SJR State’s Hall of Fame and recognized by “Who’s Who Among Students in American Universities and Colleges.” He also received the Student Leadership Award for his SGA participation.

A “very great experience” is how Bubba sums up his time at SJR State. Having friends studying along with him added to his experience. “Many of my friends also attended the College and had several classes with me, so there was never the feeling of being the new kid or trying to start over,” he said.