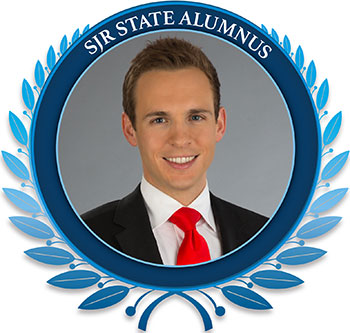 As a child, a fear of thunderstorms sparked Jason Dunning’s interest in weather. This, combined with a love for the art of telecommunication, led him to a career in broadcast meteorology. After receiving his Associate in Arts degree from SJR State in 2004, Jason continued his education in pursuit of his dream job, earning his Bachelor of Science in Telecommunication degree from the University of Florida and his Master of Science in Geosciences degree from Mississippi State University. He then worked as a meteorologist in Mississippi before relocating to Southwest Florida.

In 2011, Jason joined the weather team at NBC2 in Fort Myers as a weekday meteorologist, and he has continued to provide quality weather reports for nearly four years.

Jason carries fond memories of his SJR State experience. “When I think back on my time at SJR State, I think of it as the launching pad to my career,” he said. “The education I received at SJR State was the perfect building block to transition seamlessly into my specialty area as I continued to work toward my bachelor’s degree.”