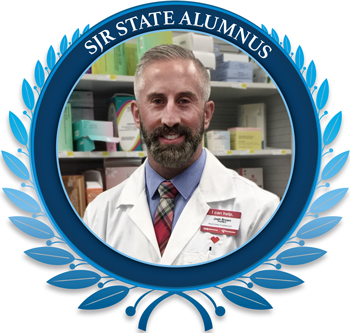 Each month, St. Johns River State College will honor one of its own in an alumni salute, celebrating the career milestones, community contributions and personal reflections of those who began their collegiate journey as SJR State Vikings.

A conversation with one of his St. Johns River State College professors led Josh Brown to a career as a pharmacist. Today, Josh, who graduated from the Union University School of Pharmacy after receiving his A.A. degree at SJR State, is employed as a PharmD staff pharmacist at CVS. Although he continuously heard that it would be tough getting into pharmacy school, Josh was accepted into seven of the eight pharmacy programs to which he applied.

“My SJR State math professor, Stacey Daniels, encouraged me to apply for pharmacy school,” said Josh. “She reassured me many times that I had what it took to get into the program. I kept my grades up and followed her advice, and it happened,” he said.

Daniels said that Josh was enrolled in her College Algebra, Pre-Calculus and Calculus I classes. “He was very dedicated and always had one of the top scores in each class he took with me,” she stated. “One day, during a conversation with him in my office, we were talking about career options. I suggested he take a look at pharmacy. He did and then began taking the prerequisite classes to get into pharmacy school. Daniels recalls how thrilled she was when Josh stopped by her office to visit her after he finished pharmacy school and passed his exams. “I was so excited to see him and to hear how successful he has been,” she said.

Josh said that he feels fortunate to work as a pharmacist, because pharmacists play a key role in the outpatient care setting. “I think being a pharmacist is the most easily accessible healthcare profession for patients to see on a day-to-day basis,” he stated. “I love my job and truly feel I make a difference in my patients’ lives.”

Josh says that keeping a high GPA and working in a pharmacy are necessary for those interested in pharmacy school. “The experience gained will definitely help you to excel as pharmacy students,” he said. Thoroughly researching each school’s application requirements is also important as well as preparing to take the Pharmacy College Admission Test (PCAT).

As Josh reflected on that stage of his life, he also reflected on his best SJR State memory, which was how invaluable Daniels was to him and his future. “SJR State is lucky to have Stacey Daniels, and I will never forget what she did for me,” he said.