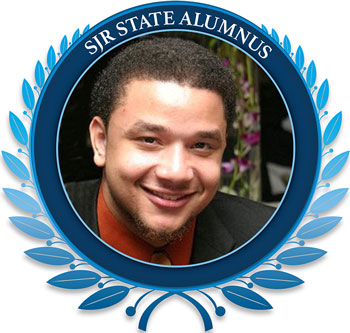 After graduating with his Associate in Arts degree from SJR State in 2011, Leon earned his bachelor’s degree from the University of Central Florida. Determined to attend what U.S. News & World Report ranks as the best trial advocacy college in the nation, Leon reached out to SJR State professor Jorge Milanes, who played a crucial role in guiding Leon through the application process for the Stetson University College of Law. Leon is currently earning his law degree at Stetson and ultimately plans to become a trial attorney.

Leon serves as a legislative representative for the Stetson Law Student Body and holds positions on the Stetson Law Trial Team and the Alternative Dispute Resolution Board. Additionally, he volunteers as a mentor for the Black Law Student Association Pillars and is a member of the Rotaract Club of Tampa. Leon has received the Rotaract Presidential Citation Award and the Best Advocate Award for the 2014 GGU Bernie L. Segal In Vino Veritas National Mock Trial Competition. At SJR State, Leon was the recipient of the Allen Calliouet Social Science Award and the Dr. Gary B. Lott Memorial Scholarship.

Leon credits God, family and numerous distinguished educators as the foundational driving force for his perseverance and unwavering focus on his academic pursuits. “SJR State was essential to creating a solid foundation for my academic career,” he said. “The time that I spent at SJR State prepared me for the various academic challenges I would eventually meet as I pursued my bachelor’s degree at the second largest university in the nation, UCF. Although SJR State is not as large as UCF, the rigorous learning curriculum and the quality of faculty the institution provided made the transition to UCF a smooth one for me. ”

“My experience at SJR State was incomparable,” Leon continued. “Not only was I being groomed for the university experience through the rigorous curriculum, but I also had the opportunity to cultivate my social skills through interactions with my peers and professors.”