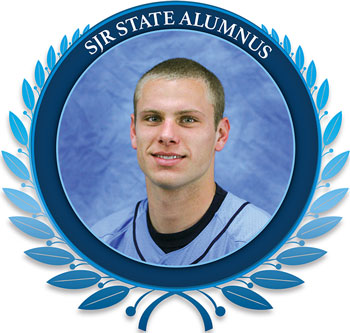 Each month, St. Johns River State College will honor one of its own in an alumni salute, celebrating the career milestones, community contributions and personal reflections of those who began their collegiate journey as SJR State Vikings.

If former student-athlete Matthew Pennington could repeat his time at St. Johns River State College, he wouldn’t change a thing about it. “I thoroughly enjoyed my two years at SJR State, which provided a smooth transition from high school academic standards to college academic standards,” he said.

Matthew graduated from SJR State with his Associate in Arts degree and continued his studies at Liberty University, where he was awarded a baseball scholarship and earned his Bachelor of Science degree in Religious Studies with a concentration in Theology and Apologetics. While SJR State did not specifically influence his career decision, Matthew believes his career choice was affected by his time at the College. “At the end of my freshman year, God called me into ministry,” he explained. “I was able to take Old and New Testament Survey classes during my sophomore year, which eventually transferred into my degree at Liberty University.”

During his freshman year at SJR State, Matthew, a pitcher for the Vikings, appreciated that the athletics department helped create a successful learning environment for student-athletes by requiring all freshman athletes to attend study hall. “This greatly enhanced my ability to earn my degree, because it created a time each week that I could get my school work done in the midst of a busy athletic schedule and travels,” said Matthew, who graduated from the College with a 4.0 GPA.

Matthew was inducted into SJR State’s Hall of Fame and received the College's Student-Athlete of the Year Award two years in a row. He was also awarded the John C. Tindall Endowed Scholarship his sophomore year. While at Liberty University, Matthew received the Christenberry Award from the Big South Conference.

As an SJR State student, Matthew attended the First Baptist Church of Palatka and was heavily involved in the church’s college ministry. It was there that he met Zach Duke and Eddy Parcher, who would start a Fellowship of Christian Athletes (FCA) chapter at SJR State. Matthew served as the chapter's president and acted as a liaison for the baseball team. He was also a member of the Student Government Association as well as an active volunteer with various community service and public school system events.

Today, Matthew is employed at Westwood Christian School in Live Oak, Florida, where he teaches algebra, Bible doctrines, health, and two physical education classes. “My favorite class to teach is Bible doctrines,” he stated, “because I love studying and teaching the Bible. My second favorite class is second grade PE, because the kids are so energetic, and they love to play.”

Matthew volunteers with the youth group at his church, helping the youth pastor with weekly services and occasionally teaching them on Wednesday nights. “I enjoy working with the middle and high school students who attend,” he said. “Again, I love to teach them God's Word.”

Looking back, Matthew said his most memorable experience at SJR State took place during his sophomore baseball season, when the Vikings set the all-time wins record. "However, it has since been broken,” he added. “We won our conference to qualify for the state tournament. Seeing the growth of our team from my freshman year to my sophomore year was very rewarding, and I enjoyed playing with my teammates. That was also the year I signed a scholarship with Liberty University. Overall, I loved the time I spent at SJR State, and I look back and see how God used that time to mold me and to help me grow closer to Him and to those I met during those two years.”