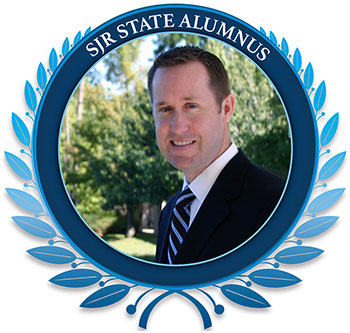 Each week, St. Johns River State College will honor one of its own in an alumni salute, celebrating the career milestones, community contributions and personal reflections of th

For the past 11 years, Ryan Blanco, R.Ph. has been voted the best local pharmacist in St. Augustine. Ryan’s journey to become one of the many well-respected pharmacists in the city began when he enrolled in SJR State’s dual enrollment program as a high school student. The College provided Ryan with more than math and science prerequisites; it also created an atmosphere that encouraged confidence and progress. After earning his Associate in Arts degree, Ryan continued his education at the University of Florida, where he received his degree in Pharmacy.

Ryan has made a name for himself for over a decade as the owner and manager of the Island Family Pharmacy in St. Augustine. Using his knowledge and amiable nature, Blanco has successfully built a strong connection between his business and the community.

When asked about his time at SJR State, Ryan praised the College’s ability to create a close-knit educational environment among professors and students. “The one-on-one time with my professors was a huge deal, especially with the type of classes I was taking in preparation for a degree in pharmacy,” he said. “The professors were willing to work with me and were so personable.” Ryan added that the College’s educational environment played a role in shaping his business perspective. “My experiences at St. Johns helped me realize I wanted my career to be connected to a community and not just a matter of finance.”

SJR State Highlights:
- Honored by the Association of Florida Colleges as a Recipient of the Leroy Collins “Rising Star” Distinguished Alumni Award