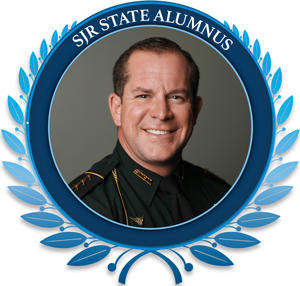 St. Johns River State College recently nominated alumnus Sheriff Gator DeLoach for the LeRoy Collins Distinguished Alumni Award. The award was created by the Association of Florida Colleges in 1990 in honor of the former Florida Governor LeRoy Collins and his contributions to the Florida College System.

As a lifelong resident of Putnam County, it has always been important to Sheriff Gator DeLoach to establish personal and professional roots within the community. He credits his local community college for strengthening those roots, as well as enabling him to pursue his dream to serve and protect.

In 1999, he enrolled in St. Johns River State College’s Criminal Justice Academy, where he thrived within the close-knit college community. Later, while rising through the ranks at the sheriff’s office, he continued his education at the FBI Academy. In 2017, at the age of 37, he began his role as Sheriff.

Sheriff DeLoach takes pride in the connection he has built with SJR State.

“Today, due to the relationship the sheriff’s office has with the college, we encourage our deputies to assist SJR State’s academy as instructors, which strengthens our relationships with current cadets and with recruiting the next generation of deputies to serve in Putnam County,” DeLoach said.

Sheriff DeLoach’s commitment to his hometown and vision to transform the sheriff’s office to better serve the community is evident through his numerous leadership roles, passion to mentor children, and belief in the importance of involving the community in the future of law enforcement.

During his earlier years as a school resource officer, he saw an opportunity to create a personal connection with high school students. He developed a class with a focus on how the criminal justice system works, which he fondly refers to as one of the most rewarding times in his career. As Sheriff, he has expanded that focus to the elementary level, fostering positive relationships with at-risk children.

After only two years as Sheriff, with the dedication of his staff, his vision to transform the agency came to fruition by overcoming a deficit of deputies. Not only were all positions filled, new recruits were willing to work in corrections at the county jail until openings became available. “When other agencies are trying to fill positions, we are fortunate to have created a work environment where recruits are willing to start in other departments to begin their careers with the sheriff’s office.”

As an alumnus, Sheriff, and member of numerous community organizations, including the Florida Cattlemen’s Association, Rotary Club, and Rodeheaver Boys Ranch Board of Directors, Gator DeLoach exemplifies all of the qualities of a true hometown hero.

“Being in a smaller community like Putnam County, I have the opportunity to establish long-lasting friendships and relationships I wouldn't have in a more metropolitan area. At restaurants, ball fields and other community events, residents feel comfortable approaching me and letting me know how I'm doing, for better or for worse, and I wouldn't have it any other way,” DeLoach said.

“Working as a deputy and now as Sheriff, my career in law enforcement is more than just a job, it’s a part of me and a desire to continually make Putnam County a better place to live, work and play for all of our residents.”