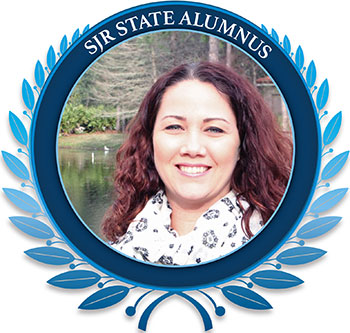 Each week, St. Johns River State College is honoring one of its own in an alumni salute, celebrating the career milestones, community contributions and personal reflections of those who began their collegiate journey as SJR State Vikings.

While earning her Associate in Arts degree from SJR State, Tina worked as a visitor services specialist at the Guana Tolomato Matanzas National Estuarine Research Reserve (GTM Research Reserve). She also volunteered with the San Diego Zoo's Institute for Conservation and Research protecting endangered species of iguana in the Caribbean.

In 2013, Tina was promoted to the Reserve’s coastal training program coordinator. As coordinator, she is responsible for the training and professional development of environmental professionals and governments.

Tina continues to give back to SJR State. She was a guest lecturer for the "Invasive Species in Northeast Florida" presentation sponsored by the Phi Theta Kappa honor society. She has also participated in the Annual Air Potato Round Up, where she joined faculty and student volunteers in collecting and removing the invasive plants from the St. Augustine campus.

Tina also enjoys sharing her time and expertise with organizations such as:

Tina’s strong relationship with the College stems from her appreciation of SJR State’s faculty and the impact the College has had on her life.

“I think this school has a great student community, but most of all, it has some of the best professors,” Tina said, adding that she felt SJR State’s professors were comparable to the professors she studied under at the university- if not better. “The professors always strive to give personal attention to students and really take the time to know you - not just as a student, but as a person. They want to foster your interests and your passions, which meant the most to me.”