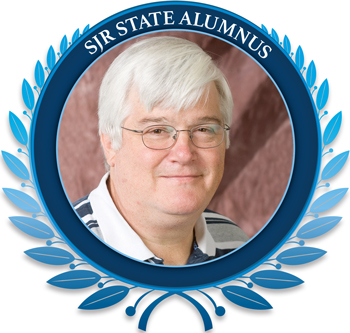 Although Andy Hall felt he was already destined for a newspaper career prior to studying at St. Johns River State College, he said that his “experience at the College helped cement” his career choice. After receiving his Associate in Arts degree from SJR State, Andy went on to graduate from the University of Florida in 1977 with a bachelor’s degree in journalism. Today, Andy is the sports editor for the “Palatka Daily News” and has won over a dozen awards for writing and page design from the Florida Press Club and the Florida Sports Writers Association.

While attending SJR State, Andy wrote for the College’s student newspaper, the “Viking Horn.” “I covered SJRJC (as it was known then) athletic teams, both for the “Viking Horn” and the “Palatka Daily News,” he explained. “It was particularly gratifying to follow the Viking basketball team to its last state tournament appearance.”

During Andy’s sophomore year, Sallie Mossman, the College’s public relations director and “Viking Horn” advisor, appointed Andy as the paper’s sports editor. “I think we published five editions,” said Andy. “I very much enjoyed working with her.” Andy said he also enjoyed the relationships he built with the College’s coaches at the time, Neal Chancey, John Tindall and Bill Tuten.

Andy was also nominated for the Hall of Fame award and became an award-winning journalist while writing for the “Viking Horn.” The Florida Junior College Conference awarded him first place for a sports story he wrote and second place for his “The Battle of the Sexes,” sports column on women’s tennis star Billie Jean King and former Wimbledon champion Bobby Riggs.

“That was one of the few stories I’ve ever written about tennis,” stated Andy, “and these were the first state awards I had ever received for anything. It was tremendously exciting. The state conference was in Miami, and that was my first trip there.”

Andy, who is an usher and a lector at St. Monica Catholic Church, is also a member of the Kiwanis Club of Palatka, where he served as president from 1998-99. Through Kiwanis, he has helped with various community projects, many of them involving youth. However, his first affiliation with Kiwanis started with Circle K, a collegiate leadership program of Kiwanis International. Andy recalled that he split his sophomore year at the College as the secretary and president of Circle K, an experience which would lead him to serve as the Florida district governor for Circle K and maintain his membership in Kiwanis for almost 30 years.