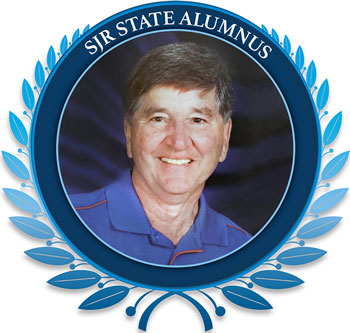 Doug Valenti graduated from SJR State in 1966 and spent 32 years as an educator in the Putnam County School District. As he steadily climbed the ladder of success, Doug kept his footing on lessons he learned from the College. “St. Johns helped prepare me educationally and professionally by providing the framework for what it takes to succeed in life, helping me to understand that hard work brings good results,” he said. Although it was a memorable experience, Doug stated that his time as a student at SJR State was also “challenging, but help was there when I needed it.”

After graduating from SJR State, Doug attended the University of Florida for one semester before joining the United States Army. His duty stations extended as far as South Vietnam, where he was assigned to the C Battery, 3/319th Artillery, 173rd Airborne Brigade. In 1970, Doug was awarded the Bronze Star Medal for Meritorious Service, along with other campaign and unit awards.

“Set your goals, and no matter how long it takes, keep working toward them,” says Doug. “Don’t accept mediocrity for any reason.” Following his own advice, when Doug returned to Crescent City after his military tours of duty, he picked right back up where he had left off and resumed his studies at the University of Florida, graduating with a Bachelor of Science degree in Physical Education in 1973. He then began working as a physical education, health, and driver’s education teacher at Rolling Green Academy in Alachua, where he also served as the school’s athletic director and head coach of the football, basketball and baseball teams. “After one year there, Putnam County called and invited me for an interview to teach at Palatka Middle School,” he said. That began Doug’s 32-year career with the Putnam County School District. During that time, he was also elected president of the Putnam Federation of Teachers and received a master’s degree in education from the University of North Florida in 1984.

Continuing to climb the ladder, Doug went on to serve as the assistant principal at E.H. Miller School, where he was promoted to principal two years later. He has also served as the principal at Kelley Smith Elementary and Beasley Middle School as well as the director of student services from 2002-2006.

Grant-writing was yet another one of Doug’s many skills. As a result, he brought a substantial amount of funding to the school district. He was also part of the selection committee that reviewed Georgia-Pacific’s mini grants for the Putnam County School District’s elementary school teachers and instructional assistants for their innovative ideas for improving education in the classroom.

Life outside of the classroom was also important to Doug. He assisted schools and service clubs with providing food, clothing and other necessities to those in need and provided refurbished bicycles for children during the Christmas season. In 1992, he was selected as Administrator of the Year by the Council for Exceptional Children. Then, in 2000, Doug was named Putnam County Volunteer of the Year for his faithful service to the March of Dimes. About his 30 years of volunteering with that organization, Doug explained, “I helped with logistics for the March for Babies each year as well as soliciting food, money, prizes and the use of a car. I put up route signs, ambassador signs and memorial posters for children who have passed on. Basically, I was there to help with anything that would make the March of Dimes walk a success.”

With a passion for sports and a heart for children, including three of his own, Doug coached youth sports – football, basketball, baseball, tennis and soccer – for many years. While his primary purpose for doing this was to help the youth build character and sportsmanship, “winning wasn’t a bad thing, either,” he said.

Doug fondly remembers the coaching he received when he played on the College’s tennis team from 1964-1966, playing number one doubles and competing throughout the State of Florida and nationally. “Some of my most memorable experiences at the College involved my participation on the tennis team,” he said. “I got to play against some of the most talented tennis players in the state and the country as we competed in the National Junior College Tennis Tournament. I’ll never forget the time we weathered a tropical storm with Coach Cliff McGriff while waiting to compete,” Doug continued. “Coach admitted he didn’t know much about tennis, but he kept us positive and always laughing. We loved him dearly. He and Coaches Tindall and Tuten were the greatest.”

A man of God, spiritual service has also been a vital and non-negotiable part of Doug’s life. As a 40-year member of St. Monica Catholic Church, he has served in various positions, including director of religious education, extraordinary minister of Holy Communion, lector, and a CCD (Confraternity of Christian Doctrine) teacher. He is currently a member of the St. Paul Small Christian Community that meets bimonthly for Scripture study. Since 1981, Doug has been a member of Knights of Columbus, the world's largest Catholic fraternal service organization.

To today’s students, Doug advises, “Give back to your family, church and community. Don’t get wrapped up in material things, and always seek to help others. You are our future. Make it a good one!”