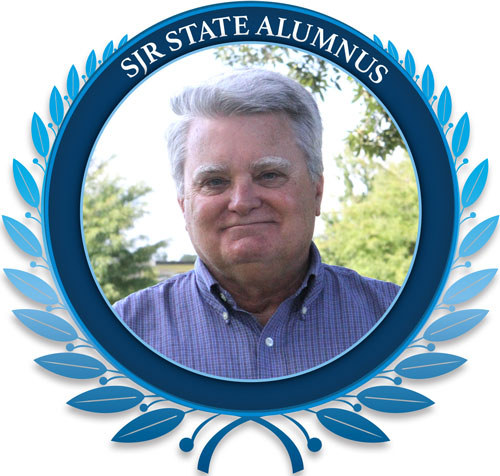 Retired attorney Eddie Anderson says that he is “proof that a kid in America can start pretty much at the bottom and still become a success, if he or she has some get-up-and-go, some basic smarts, and some (but not too much) pride and ambition.”

Born to parents who did not graduate from high school, Eddie has an aspiring story to share about his academic and business success, which includes graduating in the top 10 percent of his law school class.

Eddie attended SJR State (then St. Johns River Junior College) at almost no cost. “I was able to attend college virtually for free based on a fee waiver program in existence then for local high school students who had made good enough grades,” Eddie said.

He went on to personally fund his education at the University of Florida with the money he had saved working at a local grocery store. “During that time, I saved virtually all my money from my job at the local A&P grocery store, where I worked for five years, starting in my sophomore year in high school,” Eddie said.

Eddie, what are your fondest SJR State memories?

My fondest memories are the top-notch instructors (who were as good or better than the instructors I would later get at UF), the great intramural sports programs, and the distinctly good feelings that I kept experiencing from time to time as I was starting to meet and interact with new people and experience more freedom and responsibility. I could tell that I was starting to grow up.

What was your next step after graduating from SJR State?

I transferred to UF in September 1974, taking every one of my St. Johns credits with me. I received a bachelor’s degree in political science in June 1976. I got married to Donna Holley two weeks later and am still married after 43 years - with four kids and six grandkids.

I worked the whole summer at the local paper mill and then entered the College of Law at UF in September 1976.

How did your education at SJR State best prepare you for your next academic step and your career?

I have often said that my two years at St. Johns were my two favorite school years of my life. I enjoyed my newfound independence and responsibility, took it seriously, did well in the classes, got along well with the other students and faculty, and really confirmed and increased my confidence I had in myself. I cannot remember one negative memory from my years at St. Johns, except losing in the finals of the intramural basketball playoffs two years in a row (believe it or not, I used to be a pretty good basketball and baseball player).

Tell us about your career path

I interviewed and got a job with a 12-person law firm in Lake City before I graduated from law school. So we bought a brand new small house there in April 1979 and I started working there the week after I officially graduated.

I stayed at my first job for about seven years and then made a lateral move to join two lawyers with whom I had previously practiced. We named our firm Norris, Koberlein & Anderson. I stayed with them for about 12 years.

I finally had the courage to venture out on my own in 1999 and really enjoyed the last 17 years of my professional life on my own as a solo practitioner, with my wife as my office manager, practicing mainly in the area of real estate transactions.

I am proud to have succeeded as much as I have, and St. Johns was certainly a big stepping stone in that. I am originally from the southwest Virginia coal mining territory. Both my parents were born and raised there in extreme poverty during the great depression.

My father entered the U.S. Navy at age 17 in 1942 and helped rescue the world. My mother later studied for and received her GED diploma in 1972, the same year I graduated from high school. My father worked at the local paper mill for over 30 years. My mother worked at various unskilled labor jobs, including in the high school cafeteria while I was a student there until she got her GED. She was later hired as a teacher's aide for elementary school special education kids.

Again, Eddie reminds us that he is “proof that a kid in America can start pretty much at the bottom and still become a success, if he or she has some get-up-and-go, some basic smarts, and some (but not too much) pride and ambition.” He adds, “I am very glad that St. Johns was around in 1972 to 1974 to greatly help me along my way.”