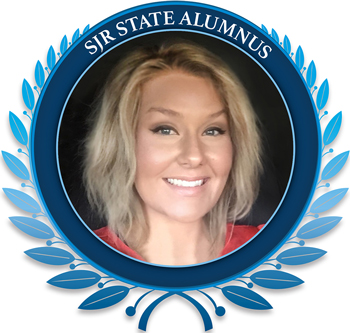 Josephine (Josie) Brown, a first generation college student, recalls a quote she heard time and time again when she attended St. Johns River State College, "Shoot for the moon, for if you miss, you will land among the stars." This popular quote, repeated often by the late SJR State Professor Doug Applewhite, M.D., became one that Josie would consistently remind herself of, so there's no wonder she was not only the recipient of numerous awards, she was also inducted into the SJR State Hall of Fame. Josie credits Dr. Applewhite for encouraging her "to shoot for the moon" in whatever she decided to pursue. "He also inspired me to be a humble individual, because although he was an incredibly accomplished person, he was the most down-to-earth person I have ever met. He inspired me to really live a life that I enjoyed," she said.

After absorbing many invaluable life and academic lessons from SJR State, Josie graduated with an Associate in Arts degree. She then received her Bachelor in Science degree in molecular biology from the University of North Florida, where she is currently finishing her master's degree in biology with a concentration in molecular biology. "I am scheduled to defend my thesis this summer," she said. "I have been accepted into the University of Florida College of Medicine, starting this fall, to work on my Ph.D. with a concentration in molecular immunology and microbiology.”

“I have a great interest in host-pathogen interactions and mucosal immunity and am intrigued by how pathogens have the ability to exploit the immune system, thus contributing to infectious disease. I always knew that I wanted to pursue science," Josie continued, "and my time at SJR State helped to reinforce that conviction. I had amazing experiences in all of the science courses that I took there and attribute much of my current desire for science to my learning at the basic levels of science.”
“Professor Werner Williams taught me so much and always made me think more in depth about what I was doing. I really appreciated learning from him and was always incredibly interested in molecular biology and microbiology, both of which he taught. Regarding where I am now, I believe Professor Williams' courses heavily influenced the path that I ended up taking," she said.

In addition to the inspiration she received from professors Applewhite and Williams, Josie credits many other SJR State faculty members for helping her reach her goals at the College. "Professor Susan Ross was very inspirational and made me believe that I had the ability to do great things," she stated. "Professor Mark Wilson helped me become great at math and made me understand that I didn't have to be afraid of math like I was before taking his classes.”

“Professor Nell Freeman and I shared amazing times together in Africa and during many community service events through PTK. She always encouraged me and told me to believe in myself, because I had a great amount of potential. She taught me how to be great in the laboratory setting, which contributed to much of my independence in the lab that I have been working in for three years at UNF,” Josie said.

Josie is grateful to have had the opportunity at SJR State to work as the laboratory assistant in the chemistry department as well as the biology department. “It was an invaluable opportunity,” she said. “This position allowed me to gain many skills that have allowed me to be extremely independent and efficient in the laboratory setting during my time conducting research at the University of North Florida." Prior to her working in the lab at UNF, Josie received SJR State's Best Lab Assistant Award and awards for chemistry and humanities classes. She has tutored chemistry students as well as taught chemistry to high school students with Professor Freeman during their trip to Africa.

As Josie reflected on her enriching experiences gained at SJR State, she also recalled how much she enjoyed understanding things from Dr. Mark Konantz's perspective. "He was also amazingly helpful to me," she said. Like Dr. Applewhite, Josie said Professor Konantz consistently encouraged her "to do big things. And big things Josie has been doing and continues to do.

Josie has helped organize medical, school and clothing supply drives for children in Africa, where she spent a month serving children. "Being a devoted member of PTK at the time, there was strong support for sponsoring children in Africa, and when I found out it was possible to travel to meet the very same children that we sponsored, I was overjoyed," Josie exclaimed. In addition to working with high school students in Africa, Josie also spent the month volunteering in an orphanage and a local hospital.

Locally, Josie has assisted with organizing holiday events for deaf and blind students at the Florida School for the Deaf and Blind. As part of Make a Difference Day, the largest national day of community service, Josie helped paint houses for low income individuals. In an effort to positively influence young children and educate them about the importance of cultural diversity, she has participated in educational presentations at Ocean Palms Elementary School as well as donated her time on a monthly basis to the STEM educational program at Crookshank Elementary School.

"Attending SJR State was a wonderful experience for me because of the people I was able to interact with and the strong sense of community associated with PTK," Josie said. "My most memorable experience at the College was my trip to Zambia, Africa. It was a great honor to represent SJR State in Africa. There is now an SJR State flag hanging in the basic school in Kaoma, Africa."