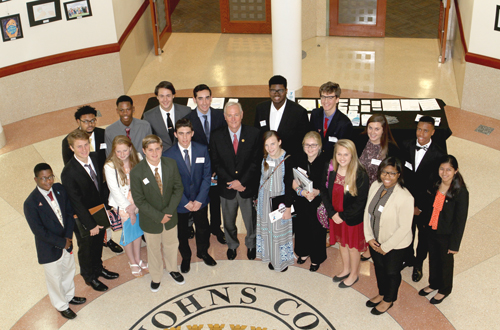 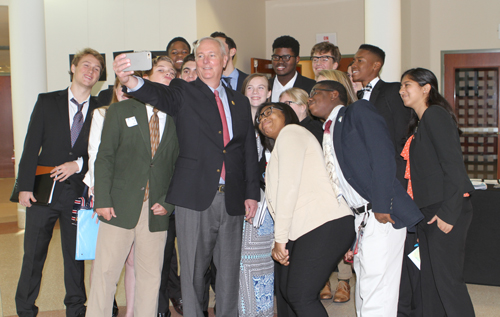 St. Johns River State College President Joe Pickens recently presented an inspiring speech on the importance of being fulfilled through service during the YMCA of Florida’s First Coast Youth in Government Pre-Assembly Showcase held in St. Johns County. The Showcase gave high school delegates the opportunity to practice and prepare for the 2017 YIG State Assembly.

Pickens, who served eight years in the Florida Legislature, shared details with the students about the origins of his public service career and the invaluable lessons he learned along the way. While Pickens described his legislative service as “rewarding and fulfilling,” he stated that his spark for government wasn’t always apparent.

Like those in attendance, Pickens’ first government-related experience began in high school. He was the first president, as a junior, of the student body at Crescent City Junior-Senior High School. “After that first year, everybody expected that I would serve again in my senior year,” Pickens stated. “But I told them that while that experience was fun, it wasn’t that much fun, so I let someone else do it.” Later, during his senior year of college, Pickens’ interest in government peaked again, and he ran for a delegate position within the Student Government Association. “But I didn’t vote for myself, and I lost by one vote,” he said. “Lesson learned.”

Pickens went on to law school, then began practicing law in Putnam County. In 1987, he was hired by the Putnam County District, serving as the youngest school board attorney within the state of Florida. “It showed,” he said. “But, over time, I learned that job well.” Eventually, he went on to serve in Florida’s House of Representatives, but Pickens recalled a time when he had absolutely no desire to add politics to his “comfortable life. However, once he challenged himself to step out of his comfort zone, Pickens said that he aspired to be, and ultimately was, the first Republican from Putnam County to serve in the state government. “It’s something that I’ll never, ever regret,” he said. “Public service changed my life forever.”

Pickens said that as he thought more deeply about his responsibility as a Florida citizen, he realized that if he didn’t play his part within public service, someone else would. “And that’s the same with you all,” he added. “Whether it be an elected position or not, someone else will always be willing to do it. But can they do it as well as you? Would they care as much as you? Would they be as responsible as you? And would they be as opened-minded as you?”

Pickens pointed out that many people who run for office are not elected the first time, and he encouraged the students to not give up. “There is no shortage of success stories where people ran and lost, and then ran and lost again, and then ran and won,” he said. “But if you don’t do it, you can’t get it back once that time has come and gone. You can’t retrieve it.”

The importance of being fulfilled through public service was another of the highlight of Pickens’ speech. “There is no greater gift that you can have in your adult life,” he said. “So many people go through life being competent and successful, or striving for that, but never feeling rewarded or fulfilled. So I congratulate you for getting involved in this at a young age and aspiring to enter public service.”

Before addressing questions from the delegates, Pickens concluded his speech by saying, “I can only hope and pray for each and every one of you that your time, should you enter public service, is indeed as fulfilling to you as my time was for me.”

Sanjana Bhargava, a YIG alum from Nease High School who now attends the University of Florida, said she was inspired by Pickens’ story and could relate to his initial disinterest in public service. “When I started in the YIG program, I absolutely did not want to do it and didn’t think it was for me,” she said. “But after I started getting into it, I realized that this is a great way to meet people, to talk and to let your voice be heard.”

Bhargava hoped that the students attending the Showcase would take advantage of the chance to talk to other people. “The biggest part about debating our bills and passing them is having that network of friends who can support your bill, talk to you about it and help you really push it forward,” she stated. “Without the people behind you, and without the community, there’s really no way to get your bill moving anywhere. So I hope they meet people, make friends and have fun.”

The delegates presented Pickens with a gavel pin as a thank you gift, a token that YIG graduates receive when they leave the program. Bhargava explained the pin’s significance to Pickens. “It’s a representation of what YIG has meant to us in our lives and how it has changed our lives,” she said. “When we receive it, it’s a reminder as we go forward of how we can continue our process as future leaders and as student leaders of the community and of the program.”