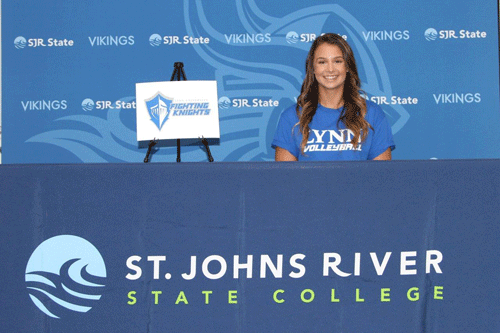 A two-year starter from Interlachen, Gillman scored 346 points, including 16 service aces, during her career as a Viking. The middle blocker also recorded 282 kills, 799 attacks, 10 assists, 77 digs and 82 blocks during the 55 matches in which she played as a Viking. She was a two-time recipient of the Mid-Florida Conference Academic Award as well as a 2017 recipient of the FCSAA All-Academic Award. “Ave Maria University reignited the fire I felt towards the sport,” said Gillman, adding “I’m excited to play two more years.”

Bisbe, an outside hitter from Barcelona, Spain, will be playing for Adelphi University in New York. Playing only one season as a Viking, Bisbe scored 363 points, including 37 service aces. She also recorded 313 kills, 904 attacks, two assists, 278 digs and 21 blocks during her career at SJR State. She was recently recognized as an NJCAA Academic Student-Athlete.

Viking teammate Siena Kelley has steered her sights toward Lynn University in Boca Raton, Florida, where she hopes to walk-on for the fall season. A native of Bradenton, the outside hitter scored 244 points, including 21 service aces, for the Vikings this season. In addition, Kelley had 209 kills, 736 attacks, 34 assists, 172 digs and 26 blocks in the 29 matches in which she played this season. She was named to the All Mid-Florida Conference second team, and was recognized academically on the conference, state and national levels. Kelley said she is thankful for her experience at SJR State and is excited for the chance to continue playing at Lynn University. “Being granted the opportunity to further extend my volleyball career at a university is something I’ve dreamed of my whole life,” she said.

SJR State athletics consist of women’s volleyball, women’s fast pitch softball, and men’s baseball and are based on the Palatka campus. For more information regarding SJR State athletics, visit www.SJRvikings.com.

Viking sophomore Siena Kelley will attend Lynn University next fall, where she hopes to play for school’s the volleyball team.