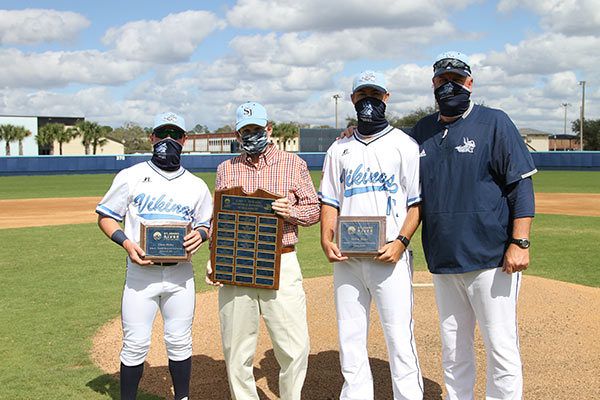 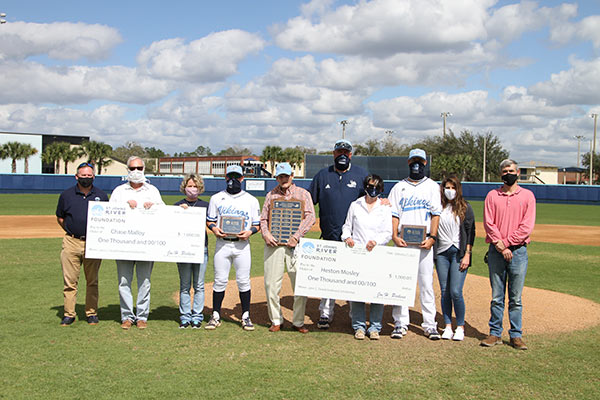 Malloy, a sophomore from Trenton, Florida, has demonstrated outstanding character and leadership. He is the first two-time recipient of the scholarship.

Ross Jones, SJR State’s head baseball coach and athletic director, called Malloy the team’s leader on and off the field. “His work ethic and character are among the best of any baseball player whom I’ve had the pleasure to be around in my 29 years in coaching,” Jones said. “Chase Malloy very simply exemplifies what every college coach wants in his players.”

This season, Malloy is hitting 333 and has an on base percentage of 475. His fielding percentage is a perfect 1.000. In the classroom, Chase has excelled as well. He was named to the Mid-Florida Conference All-Academic Team, the FCSAA All-Academic Team and he was named an NJCAA Academic All-American. He was selected by Who’s Who Among American College and Universities and was recently named by the Florida College System as one of the top 50 college scholar athletes in the state.

Malloy is pursuing his bachelor’s degree in organizational management at SJR State. He plans to transfer to Jacksonville University this fall, where he will continue his business studies and baseball career.

Mosely, a sophomore from Metter, Georgia, transferred to SJR State after spending his freshman season at Valdosta State. Last year, Mosely battled an injury and did not pitch for the Vikings. This season, Mosely is off to a great start with 17 innings pitched, allowing only 7 hits, while striking out 21 and only walking 4. He has an ERA of 1.59.

Mosley also completed his AA degree from SJR State and is enrolled in the bachelor’s program. He has excelled in the classroom with a 3.90 GPA.

Coach Jones calls Mosely a grinder. “He has overcome two years of injuries to be here. He never quit, never gave up. His work ethic and character has been on display every day since he stepped foot on this campus. He is a leader by example, never makes excuses and is respected by everyone,” Jones said.

Mosely has signed to play at Jacksonville University, where he and Malloy will continue to be teammates. Heston plans to earn a degree in exercise science.

The criteria for the Tindall scholarship include demonstrating exemplary work ethic and leadership, as well as quality performance in the classroom and on the field.

The scholarship was established in 2011 in honor of former coach John Tindall, who devoted 30 years to coaching the Vikings through 591 wins and nine Region VIII tournament appearances, placing him in the nation’s top 10 for career wins at the time of his retirement in 1997.

In 1961, the Vikings took the field for the first time and have since dedicated the past half century to building a solid reputation for producing superior student-athletes. The College has continued its tradition of producing a strong baseball program with facility improvements including a covered practice facility, dugout and field renovations, and new grandstands.

The scholarship provides a lasting mark on the future of the SJR State baseball program, because it allows the College Foundation to award a scholarship every year, in perpetuity, to a deserving student-athlete. Interested in giving to SJR State? Please contact the Foundation Office at 312-4100.