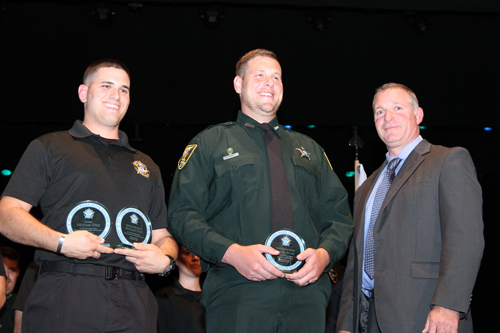 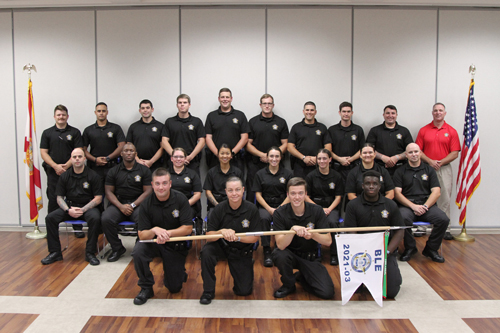 The Honorable H. D. “Gator” DeLoach III was the guest speaker. During his commencement address, DeLoach reassured the graduates that there has never been a better time, in his opinion, to begin their career. “Our state, our governor, our legislature, and the people we serve in our respective communities care deeply and genuinely about you, and want you to have a distinguished, prosperous career.” He included several scenarios that demonstrated community support including, those who “anonymously pick up your lunch tab, offer you a water when you’ve been baking in the August sun for four hours on a traffic crash, the elderly lady who simply grabs your hand just to tell you thank you for the job that you do, or the warm smiling hugs you exchange with a classroom full of children after reading their favorite book out loud to them,” he said.

Reminding the graduates of the importance of self-care and family, DeLoach also encouraged the cadets to find a hobby that they can do regularly, and preferably with their families.

During the ceremony, Michael Ettel, Duval County resident and crossover student from the Academy’s corrections program, received the Top Scholar Award for highest academic achievement and the Medallion Award for displaying class leadership. Hunter Jones from Putnam County was awarded the Top Gun Award for highest marksmanship scores during the firearms qualifications.

Located at the St. Augustine campus, SJR State’s Criminal Justice Academy offers certificate programs and provides job-related training to prepare cadets for entry-level employment in the field. Upon completion of the certificate programs, cadets will be eligible to take the state certification exam. The certificates also provide credit hours that can be transferred to SJR State’s associate in science degree in criminal justice technology.