FloArts presents live showing of “Memoirs of a Forgotten Man” 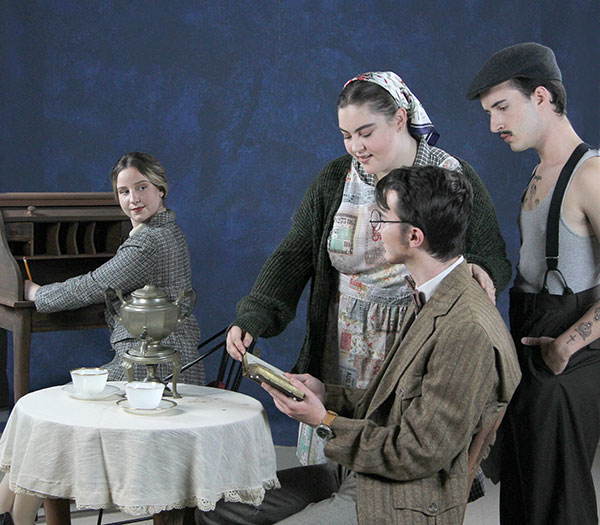 After a year of being unable to perform on the main stage of the Florida School of the Arts (FloArts) located at the Palatka campus of St. Johns River State College, FloArts is thrilled to present a live showing of “Memoirs of a Forgotten Man” by D. W. Gregory. The play is directed by acting instructor Patricia Crotty and runs at 7:30 p.m. on Thursday, June 17 through Saturday, June 19 and at 2:30 p.m. on Sunday, June 20. Admission is $5. To adhere to social distancing, seating is limited and on a first-come, first-serve basis. Facemasks are optional.

Background
As a result of a former FloArts student suggesting that Crotty see and direct “Memoirs of a Forgotten Man,” Crotty is delighted that this “abstract and presentational play” is soon coming to the FloArts stage. “It’s a beautifully written and timely play,” she said, adding that the inspiration to the playwright came from a story about a real Russian man who had synesthesia, a sensory condition. “He can’t forget anything he has experienced, heard or seen because he has so many sensory connections to each experience,” Crotty explained.

According to Crotty, a psychological study had been done on this man in the 1930s, and while the play is not about this particular man, it’s about the idea of someone having an almost perfect memory during the political climate of Russia in the 1930’s. Crotty stated that the question then became, “How does somebody with a perfect memory live in a totalitarian regime of Russia in the mid ‘30s when political purges are going on and survival actually depends on being able to forget?’ ”

Main character
Based on this background, the main character of the play is a journalist with an impeccable memory who accidentally becomes dangerous to himself and other people, simply because he lives in a society that depends on the truth being flexible, Crotty explained. “The play deals with the difference between facts and truth, and how do we survive and deal with getting through the day when those things are on the table,” she said.

Small cast, multiple roles
Although it’s a serious play, Crotty said “there’s a lot of joy going on in rehearsal because everybody’s just happy to be rehearsing.” The small cast will play multiple characters, which Crotty described as “part of the beauty of the story, as the small cast and their roles showcase the acting.” The audience will watch these character transitions unfold, and the lighting will help to establish the environment or the change in the environment.

Cast
The cast includes Noah Mastoridis as Kreplev and Vasily; Suzannah Gaston as Natalya and Madame Demidova; Peyton Kalaczynski as Alexei and Azarov; McKayla Whiteside as Miss Markeyevna and Mother; Kwabena Flewellyn as Utkin, schoolboy and Man in background; Crystal Addison as peasant woman and schoolboy; and Kira Heuring as circus assistant and peasant worker. The understudies are Courtney Burnett, Heuring, Corey McKinney and Noah Ogg.

Age appropriateness
While the play contains no adult language, violence or content of a graphic nature, due to the political nature of the content, Crotty stated that the play is best for older children, such as tweens and teens. “The play requires a lot of thinking - thinking about what they’re experiencing and thinking about it in the context of their own current experience,” said Crotty. “It’s not highly active – it’s a thinking person’s play, and I think it explores, in a really nice and personal way, about what’s happening to this one man with incredible gifts and how that can create confusion and mess things up.”

Firing on all cylinders
During the pandemic, some of the actors in “Memoirs of a Forgotten Man” took on non-acting tasks, such as building sets and video editing, so Crotty is grateful that they can now return to their “real love.” She said, “We all had to learn a lot and take on different jobs and leave our comfort zone. Now, the students can step back into their comfort zone and into the areas they came to FloArts to study.”

“We’re firing on all cylinders. FloArts is back,” Crotty continued. “Everyone is working very hard to tell this really beautiful story.”

Thought-provoking notes from the playwright D.W. Gregory
“Memory is not merely a collection of images or facts, but the construction of a narrative. It is a way of creating ourselves. Over time, memories change. They evolve as we evolve and continue to create ourselves, to create meaning in our lives. But if you cannot tell stories to yourself, then the memories do not change – and we cannot create our own story. So perhaps the gift of total recall is no gift at all – because it means we never gain any understanding of ourselves.

“A personal story. It’s how to stay sane. When our agreed upon narrative is disrupted – so that I deny your suffering, your sacrifice. Deny your very existence – we lose our bearings. We lose our way. Our very sanity. It becomes a form of national madness. It played out in Stalin’s Great Purge, and it plays out on the American political stage when argument gives way to propaganda. How do we find our way back to the sane center?”

Florida School of the Arts is part of the academic and administrative structure of SJR State and awards two-year associate degrees. The School serves the entire state of Florida and is located on the SJR State Palatka campus. For more information, call 386-312-4300 or visit floarts.org.

PHOTO CAPTIONS:
“The tide is turning!” shouts FloArts student Noah Mastoridis, who plays Vasily in the political thriller “Memoirs of a Forgotten Man.” The play explores the conflicts that surface when a totalitarian regime seeks to rewrite history and clashes with a man who possess a perfect memory. From left are FloArts students Peyton Kalaczynski, Mastoridis and McKayla Whiteside.

Acting student Suzannah Gaston (far left), who plays the dangerous town gossip, eavesdrops on a conversation in the FloArts production of “Memoirs of a Forgotten Man,” a political thriller that intertwines memory and history. Also pictured are Peyton Kalaczynski, McKayla Whiteside and Noah Mastoridis.