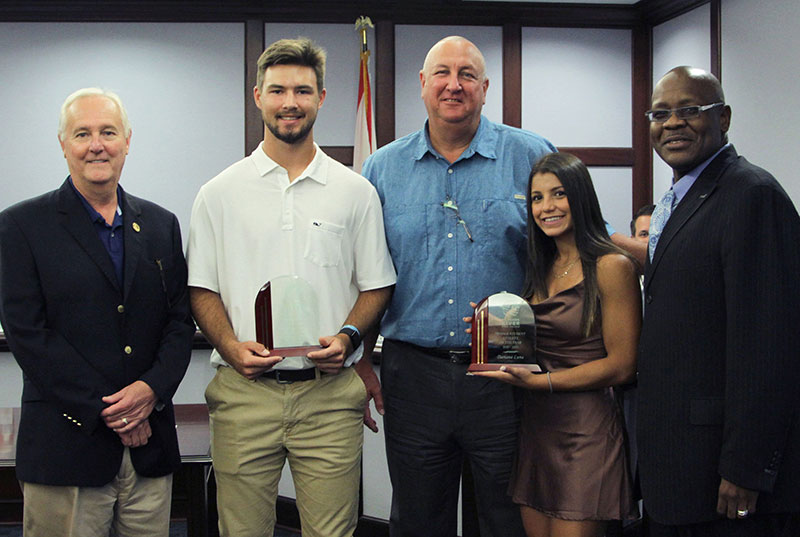 Mosley graduated with a 3.91 GPA and was the 2021 recipient of the John Tindall Memorial Scholarship and a 2021 First Team All-Mid Florida Conference pitcher named to the Mid-Florida Conference All-Academic Team and the FCSAA All-Academic Team. He has signed with Jacksonville University, where he will continue his education with a bachelor’s degree in exercise science. “As a player, I always try to understand my body and how to make it move better, so exercise science was perfect for me,” said Mosley.

Mosley’s most recent stats include 62 innings with 62 strikeouts and a 2.63 ERA. He also threw a complete game in the conference tournament.

Mosley said, “Baseball is such a difficult game that can never be perfected; however, I love going out there and doing everything I can to put the team in a winning position. It has been a blessing to play at SJR State. I feel like I have so much support and people willing to lend a hand. The atmosphere in Palatka is all about baseball, and there are always die-hard fans.”

According to baseball coach Ross Jones, "Heston is the perfect example of what we ask all of our student-athletes to strive to be - great work ethic, highly principled and first class. Heston's successes on the field and in the classroom are a direct result of his character."

In 10 years, Mosley hopes to still be playing baseball or working as a pitching trainer and physical therapist.

Luna, who is from Caracus, Venezuela and attended high school in Davie, Florida, considers being a libero one of the most difficult volleyball positions, and that’s precisely what she enjoys most about it. “It challenges you at every point, in every game and requires a lot of concentration and mental strength. There is no giving up being a libero,” said Luna.

According to volleyball coach Matthew Cohen, “Dariana has been a leader for the indoor and beach volleyball teams the past two years. Her work ethic is unmatched in the gym, the weight room and, most importantly, the classroom.”

Luna will return to SJR State for the fall 2021 season and said that playing for the Vikings is one of the best things that has happened to her. “Since we are a small school and team, we get to know each other better, so I consider my team as my second family. We always challenge, support and make each other accountable. Our coaches really do a good job by looking for ways to make our team improve, both as a player and as a person.”