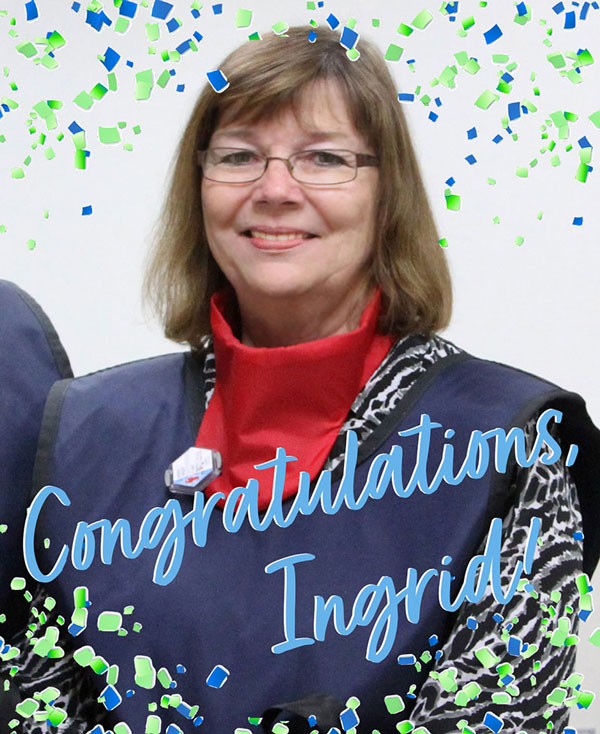 How do Vikings say goodbye? In modern English, there are many ways to say farewell. In Old Norse, one would say “heyrumst,” which is not so final and means “I will hear from you.”

Ingrid Wright retires after 13 years at SJR State. She served as an instructor and the director of the Radiologic Technology A.S. degree program.

Ingrid, what brought you to SJR State?
It was a long journey! After 26 years working in various positions in radiography Departments, including in my home state of Wisconsin, then University Hospital (now UF Health - Jacksonville) and 23 years at Baptist Health in Jacksonville and Jacksonville Beach, I made the move to Flagler Hospital in St. Augustine. This was roughly the same time that the Radiologic Technology program at the College began in St. Augustine, and I became involved with the students from the program assigned to Flagler Hospital.

After a year or two I became the clinical instructor for the radiology students in our department, meaning I was responsible for evaluating them while in the hospital and being their main mentor in the department. In 2006 the program director asked if I would be interested in teaching part-time. First it was one class with lab 3 evenings a week after my shift at the hospital in Fall and Spring semesters. Then another class with lab 2 days a week was added for 8 weeks in the Fall. Then I quit before the Spring semester - it was too much working full-time, being on call and teaching 5 days a week!

In 2008 a full-time position became open. I didn’t realize this until late September, but as I had enjoyed teaching so much I decided to give it a shot and applied and was hired starting October 13.

“While I missed direct patient care, I found it deeply satisfying to ensure our students were well-educated, not only in the technical requirements of being a good radiographer, but also in realizing the importance of assuring empathetic patient care and in becoming a patient advocate.”

How would you describe your teaching style?
I’ve found that no matter if I was teaching radiographic positioning and anatomy or patient care, which are directly relatable to what students will see and use to perform in the health care environment, or teaching Radiologic Science, Radiologic Physics, Radiobiology or any other course, it is important that students don’t just memorize, but understand the concepts. Textbooks are great, but they aren’t 3-dimensional. For example, there is a picture of the x-ray beam in the book that indicates it’s a cone shape - but it’s only 2-dimensional in the book. I made a paper cone to show them the 3- dimensional shape and put dry spaghetti in it to indicate the paths of the individual photons. To show why it’s important to take chest x-rays upright if there is pleural fluid, we take x-rays of partially filled water bottles - first upright, and one can see how much there is, a distinct line where the top of the fluid is, then with the bottle lying down - you can see there is fluid but not how much. There are always little tricks along the way to make things understandable.

What do you think your students will remember about you the most?
I hope that they will remember two things - one that I cared about each of them and took the time to listen, whether it was personal problems they were dealing with or struggling with understanding the material. This means 10 office hours a week are seldom enough, but it’s more important that they are successful and that they feel someone cares. Second, that I expect them to be the kind and empathetic radiologic technologist. That I expect them to work with the patient, use critical thinking skills to avoid making any exam painful to the patient, be a patient advocate, and to be the kind technologist with incoming students that they will be working with as well.

What do you consider to be one your best teaching moments or what are you most proud of?
There are too many best teaching moments to count, but it’s whenever I see the light bulb turn on - they get it! One that comes to mind is a student who came to my office before a test who said she’d studied all night and just couldn’t get a concept in radiographic physics. I started a sentence - and her eyes lit up and she finished the sentence! She DID get it! I’m most proud when I get the call that a student passed the certification exam, and then when I see them working in the field and being the BEST patient caregivers while taking excellent images. I want my former students caring for me if I need it!

What would students be surprised to learn about you?
Probably how many hours I’ve put in beyond the regular work day to get things just right!

What are you looking forward to the most?
Sleeping in! And not having to constantly worry about those things that I have to finish before a certain date/time.

What is the last song you played from your playlist?
RESPECT by Aretha Franklin