FloArts presents “Songs for a New World” via internet 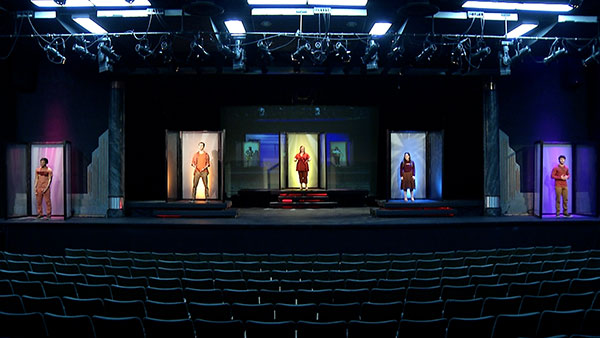 FloArts students have successfully worked through pandemic rehearsal issues to bring the musical “Songs for a New World” to patrons this month. With music and lyrics by Jason Robert Brown, this contemporary musical, originally produced by the WPA Theatre in New York City in 1995, can be viewed online at www.showtix4u.com/event-details/46121 for $5 plus a service fee. Tickets are currently on sale to the public via the above link.

The pre-recorded production premiers Thursday, February 18 at 7:30 p.m. and will available through January 31, 2022. Although the show runs an hour and a half in length, each ticket gives patrons 48 hours to watch the streamed video recording on one device; therefore, it does not have to be viewed in one sitting.

The seven-member cast has been working on “Songs for a New World” since September, as it was initially scheduled for the first week of December 2020, but was pushed back to February due to the pandemic. “It’s been challenging but very rewarding to get to this point,” said FloArts musical theatre instructor and concert director Stephanie Masterson. “After almost eight months or so of not being on the stage, just being in rehearsal again — even with the restrictions — has been absolutely euphoric for everybody. It’s been a breath of fresh air,” she said. McKayla Whiteside, a musical theater freshman student from Riverview, Florida, added, “This show has been such a blast, and it’s so exciting to finally be able to perform after being isolated for so long.

“Putting a show together amidst a pandemic definitely has its challenges; we have to maintain a 15-foot distance while we sing, since we use so much air — along with wearing ‘singing masks,’ a special kind of mask that is elevated off our mouths so we can resonate and enunciate while singing and performing. Not to mention running rehearsals over Zoom for months and months before even rehearsing in person,” Whiteside continued. “It has definitely been an interesting experience, but I wouldn’t trade it for the world. I’m so lucky to get to perform alongside — socially distanced, of course - so many talented performers, technicians and professors who have worked so very hard to do what seemed impossible at one time.”

Masterson said she selected this musical due to its relevance to the world we’re experiencing today, and the moment of decision is the theme. “With people having to make many choices that they didn’t think they were going to have to make over this past year, each song is its own little story about somebody’s moment of time and decision,” she said.

Comprised of 17 songs and seven voices, this “abstract musical,” as Masterson describes it, has no developing character. The students will be playing different characters, but they’ll each simply wear one contemporary outfit throughout the show. The company consists of Nicholas Aiello, Neal Baker, Courtney Burnett, Austin Butcher, Kwabena Flewellyn, Corey McKinney and Whiteside.

Since Masterson’s goal was to challenge the students, some of the songs are vocally demanding with difficult harmonies. Songs include “The New World,” “On the Deck of a Spanish Sailing Ship, 1492,” “Just One Step,” “I’m Not Afraid,” “Stars and the Moon,” “The World Was Dancing,” “I’d Give It All For You,” “The Flagmaker 1775,” “Flying Home” and more. “They’re beautiful, but singing them is not the easiest,” said Masterson. “It’s challenging, and I wanted to challenge the students.”

Masterson encountered her own share of challenges during this process. Last semester, she worked with the students over Zoom, but since a group of people cannot sing at the same time that way, the cast had to resort to singing with the cast recording, “which is something I never do,” said Masterson. “I never do that, but there was no other way. I was playing out their parts, and I sent it to them, but to have any kind of consistency or continuity, we had to do it that way. Then, one day I thought, ‘Wait a minute. I could have them each record their own parts.’ And so they each recorded their own parts to each song and sent it to me, and I figured out how to put them all together in an app. Then, they could finally hear themselves,” Masterson explained. “It then felt like we were really rehearsing, but it was definitely a new way.”

When the cast could attend in-person rehearsals in January, rehearsing was still of a different nature due to COVID restrictions and CDC rules. And also of a different nature was FloArts student and stage manager Angel Warren carrying out her production stage manager duties from Nashville, TN. From afar, she played a vital role in understanding the CDC guideless for this situation and ensuring the cast followed these strict singing rules to stay safe during rehearsals.

“Well, I can say that being a stage manager during a pandemic is challenging to say the least,” said Warren. Reflecting on the months when the cast members were unable to hear their collective singing voices, Warren said, “It did feel a little disconnected from what you normally get from being a part of a show, but finally getting to meet the cast and hear everyone sing together and seeing real faces and hearing live voices outside of grainy recording made everything all worth it.”

The first week students returned to campus, rehearsals took place outdoors, and the FloArts foyer was taped off in sections for safety. Masterson said there were different color tapes all over the place. Then, once indoor rehearsals began, only five people could be on the stage at once; therefore, for the songs that included the full cast, two people would have to be out in the audience area. “The spew from singing can go up to 15 feet, so you have to have a bubble of 15 feet all around you,” Masterson explained, reiterating how different this process has been for her, the students and the FloArts instructors.

Practices can only be for an hour and a half at a time. Everyone has to then leave the room to allow it to air out for a half an hour, thus, making the rehearsals longer than usual. However, in spite of these unusual times, Masterson said the rehearsals have been great. “The students are doing a stellar job. The scenic and lighting are coming along. This is building a village. It takes a village to get this off the ground. Everybody is pulling their part. All of the faculty members are jumping in,” she said.

“Hear My Song,” a song sung by the whole company that relays the message that “everything is going to be all right,” will close the show. “We’re living through this right now, and we all have choices to make, and things that have happened to us,” said Masterson. “We have lost people who, of course, we didn’t want to lose, but we have to go on.”

This project has brought Warren joy amidst these challenging times. “This project feels so special,” she said. “Working with an extremely talented cast and being a part of the show has brought me so much joy in a time when things are so difficult all over the world. This is a special team, and I’m just happy to have been selected to be a part of the unique magic we are creating in ‘Songs for a New World.’ I am so blessed to be creating art during a pandemic.”

Florida School of the Arts is part of the academic and administrative structure of SJR State and awards two-year associate degrees. The School serves the entire state of Florida and is located on the SJR State Palatka campus. For more information, call 386-312-4300 or visit www.floarts.org.