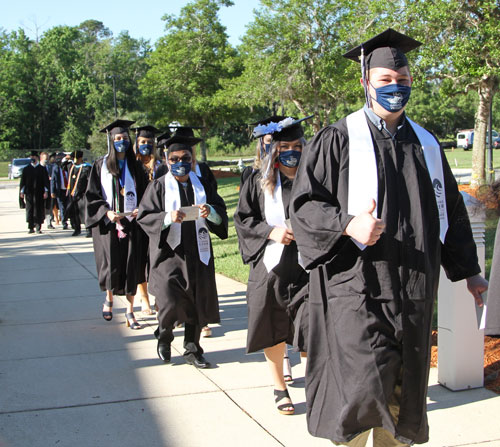 St. Johns River State College celebrated its Spring Commencement on May 7, honoring the students who earned their associates and bachelor’s degrees or college certificates. More than 300 of the 700+ graduates participated in the ceremonies held at the Thrasher-Horne Center located on the SJR State Orange Park campus.

The spring graduation was presented in three ceremonies in order to accommodate graduates and their guests with proper social distancing. During his first address to more than 100 high school seniors who earned their Associate in Arts degree, SJR State President Joe Pickens told the graduates that they were among one of the most significant audiences in which he had presided over. “You’re making history for many reasons,” Pickens said. “This is, I believe, the first college graduation ceremony in the history of the state of Florida that is exclusively consisting of dual enrollment and collegiate high school students… You would not be here today graduating without the partnership that we share and appreciate with our K12 partners in Clay, Putnam and St. Johns counties.”

Pickens shared how he asked the attending school superintendents Rick Surrency (Putnam County) and David Broskie (Clay County) to choose one word to describe the graduating class. The word was perseverance. “Thank you,” Pickens told the graduates. “Thank you for persevering.”

Each graduate this spring has his or her own story of personal growth, perseverance or career changes to share. In total, the graduating class included students ranging in age from 17 to 50 and beyond, 192 dual enrollment and collegiate high school graduates, as well as EMT, nursing and radiologic technology graduates. Many were the first in their family to graduate from college, including Mary Givens, 48, of Palatka.

Givens, who is also a Collier-Blocker In-District Scholarship recipient, admits that her academic journey as a nontraditional student was difficult at first, juggling coursework with family responsibilities and her job as a certified nursing assistant.

Givens said that it was always her goal as a single mother to raise her children and work hard to provide for their needs, but after her last child graduated from high school, it seemed like the perfect time to continue her education. “I decided it was time for me to do something for myself,” Givens said.

“My very first semester I had a lot of doubts about going back to school,” Givens said. “I saw all these young students, and I was like, ‘this was the wrong decision.’” But after scoring well on her first quiz (and outscoring some of the younger students), she began to realize that her age was not a factor. “You’re never too old to achieve a goal. You just have to put your mind to it,” she said.

With her A.A. degree completed, Givens plans to begin SJR State’s nursing program this fall and work toward her long-term goal of owning a childcare facility and assisting children with special needs. “To do that, a RN is needed on staff,” she said. She credits her experience as a CNA as inspiration to continue her education in health care. “The love that I had for the patients and the love that the patients and their family members had for me was the best feeling ever,” Givens said, adding that the desire to care for her parents also played a role to major in nursing. “I wanted to be knowledgeable enough to care for them when they got to the point of needing care. I’m so glad I was able to successfully assist with the care of my father during his final day, which was due to some of classes I had already completed.” 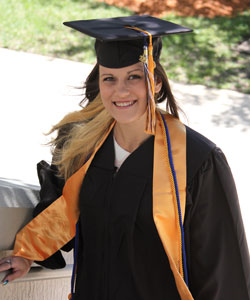 Courtney Hoffman, 26, of Interlachen, was presented with the Valedictorian Award. The award is given based on grade point average and difficulty of courses. Hoffman hopes to transfer her Associate in Arts degree to Embry-Riddle Aeronautical University this fall to pursue a degree in aerospace engineering - after she completes NASA’s Community College Aerospace Scholars summer program.

Hoffman said her ultimate goal is to reduce scarcity. Growing up in a low-income family and postponing her own college while working as an auto mechanic and waitress, she understands firsthand the burden of financial stress.

“My look on the world is that people suffer because there is scarcity in the world… People struggle to get their fair share in life and I think as a whole we can all do better if we can learn to harness what’s out there and learn to mine asteroids and branch out and get humanity on another planet,” Hoffman said. “I want to do the most I can for humanity.” 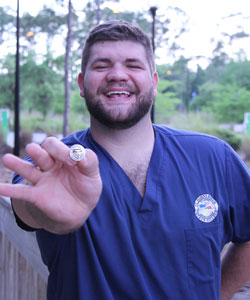 Among the graduates was Justin Carter, 25, of Clay County. Employed as a piano mover at a local business, Carter enrolled in SJR State’s radiologic technology program. His passion for technology combined with the satisfaction of helping others in a healthcare setting came into play with him choosing this field. “Nearly all my closest friends are employed in the healthcare field, and their job satisfaction is what initially interested me in this field,” Carter said.

Carter said his favorite part of the radiologic technology program has been clinical studies. “It has been such a wild ride to apply what we learned through working in real hospitals with experienced staff,” he said. “I learned exactly how adaptable I can be. I was stunned when I walked into an operating room for the first time. About four hours later, I was assisting surgeons with seeing what they were working with. It still blows my mind.” 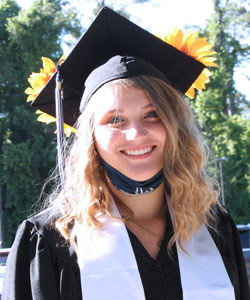 Also among the graduates was Abby Cathlino. When SJR State introduced a collegiate high school program to Interlachen High School students in 2018, Cathlino first thought the opportunity was too good to be true. But with encouragement from her mother and big brother, she enrolled in the program as a high school freshman, and spent the next four years working toward her high school diploma and her A.A. degree.

Cathlino, who once described herself as “the quiet kid who stayed in the corner,” said she often struggled with self-doubt, feeling that she did not measure up to her classmates. “I was the kind of person who would put myself down and thought everyone around me was smarter,” she said. But as she completed each semester, Cathlino said her confidence grew. “I’ve been able to grow into a young woman and find value in my accomplishments,” Cathlino said.

Cathlino said she is grateful for the jump start in her collegiate journey and plans to study cosmetology before returning to SJR State to earn a bachelor’s degree in organizational management. “In 10 years, I see myself running my own salon,” she said. After years of struggling with self-doubt, Cathlino said her dream job will allow her to help others feel good about themselves. 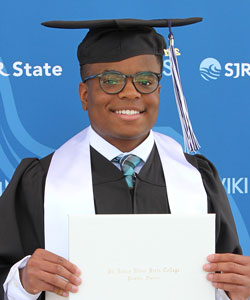 Believing that he’s “crazy enough to change the world,” 17-year-old Jarahn Johnson is certainly on the fast track to impacting society, including becoming a neurosurgeon. After skipping the 6th grade; writing a book, “The Cave” (available on Amazon); representing Clay County as a Florida 2020 Sunshine State Scholar; being a College Board National African-American Recognition Program Scholar; earning a 2nd Degree Black Belt in Taekwondo and more, Johnson has clearly connected to the core of his potential – early!

A dual enrollment student from Oakleaf High School, Johnson said he purposely pursued the rigorous classes along his academic journey. “The chance to earn my A.A. at the age of 17, as well as reduce my future collegiate course load, was an opportunity that I could not pass on,” Johnson said.

Johnson is headed to Cornell University this fall to pursue a bachelor’s degree in biological sciences on a pre-med track. He then plans to attend medical school in preparation to become a neurosurgeon.

A portion of the ceremony was dedicated to acknowledging retiring faculty. SJR State’s Senior Vice President Melissa Miller, J.D., recognized four faculty members for their exceptional service to students.  “They are wonderful examples of the value of the state college educational experience.  These are professionals who represent real and successful careers serving, protecting and enriching our lives,” Miller said.

Ingrid Wright retires after 13 years as an instructor and the director of the Radiographic Technology A.S. degree program.

Jon Gifford retires after 14 years as an instructor and coordinator for the Criminal Justice Training Academy.

Stephanie Masterson retires after 27 years with Florida School of the Arts in 1994 as a professor of voice.

The Thrasher-Horne Center is owned and operated by SJR State and is located on the Orange Park campus at 283 College Drive.

The College was established in 1958 as a public institution serving Putnam, Clay and St. Johns counties. St. Johns River State College is accredited by the Commission on Colleges of the Southern Association of Colleges and Schools to award associate and baccalaureate degrees. Contact the Commission on Colleges at 1866 Southern Lane, Decatur, Georgia 30033-4097 or call 404-679-4500 for questions about the accreditation of St. Johns River State College.