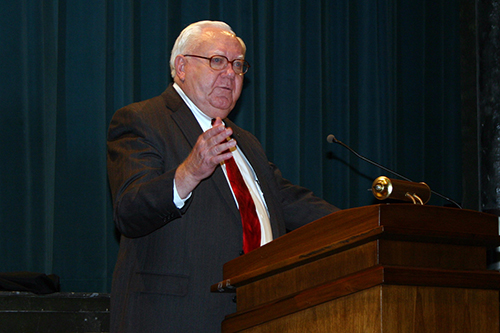 The St. Johns River State College family is mourning the loss of former President Robert L. McLendon Jr., who died April 26 at the age of 84. McLendon served as SJR State’s third president for 36 years, retiring in 2008 as the most senior president in the community college system.

"Doc, as I called him," Pickens continued, "was larger than life in so many ways and was the bedrock of St. Johns River Jr./Community College. His shaping of the College and its future over almost four decades is an unparalleled achievement in the annals of the Florida College System. Fittingly, the College’s Palatka campus is named in his honor."

When McLendon arrived at the Palatka Campus in 1966 as the Dean of Academic Affairs, the sparse buildings and surrounding dirt roads were only a sign of potential to the 29-year-old Marianna native. The College's true potential would slowly begin to surface in the years following McLendon's appointment as president in 1972 when it received the state appropriations to build the Florida School of the Arts and add a second location in Orange Park.

The addition of FloArts and the Orange Park location convinced McLendon that he would not only make the College his career, but would also make Palatka his home. "I felt this was an excellent place to raise a family, and my children loved it here," McLendon said in a 2008 interview.

The Orange Park location would later expand from a few portable buildings into a full-service campus in 1989, including the $21-million Thrasher-Horne Center for the Arts in 2004 and the $12-million, two-story health-sciences facility in 2008.

McLendon's vision for St. Johns County included the beautiful St. Augustine Campus in 1996, the criminal justice center in 2003 and a new health-sciences facility in 2010.

Perhaps one of McLendon's finest achievements is retiring from a College that is free of debt. "We're in good shape. We're as good as it gets," McLendon said in 2008. "There's not a school in the state that is as well taken care of, ...is as comprehensive, or is as financially secure as St. Johns," he said. "We know what to do. We know how to do it."

Pickens said the greatest gift that Dr. McLendon gave to him was to hand over the reins of an institution with no problems, financially or otherwise. "In fact, Doc told me himself on his last day as President, "'Joe, this College is in great shape; it will run itself for years if you just don’t screw it up!'" Pickens said. "My biggest hope is that I haven’t."


The viewing for Dr. McLendon will be Sunday, May 1 from 1- 3 p.m. at Johnson Overturf Funeral Home in Palatka and the funeral will be 3 p.m. at the same location.