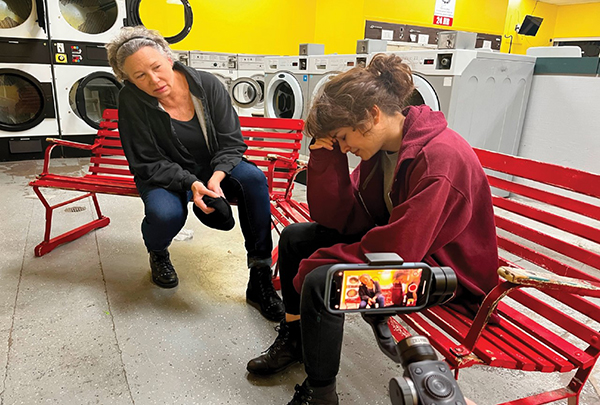 A new storytelling experience, “2022 Film Festival” (formerly “The Actors’ Project”), is coming to the main stage of the Florida School of the Arts (FloArts) located on the Palatka campus of St. Johns River State College (SJR State) at 7:30 p.m. on Friday, April 22 and Saturday, April 23. A variety of original narrative stories developed and produced on digital video by FloArts students will be featured. Admission is $5, and free popcorn is included. The public can also vote for their favorite films.

With the goal of building the presence of screen performances at FloArts, festival director and acting professor Kevin Kelly explained that the process of preparing for the film festival provides students with more skill and experience so they can gain more confidence in front of the camera. “It’s all about encouraging young artists to explore and grow and try new things and gain experiences that they wouldn’t be able to gain otherwise,” said Kelly. “That’s why the School is here.” About 10 original film projects will make up the festival with the overall show running for about an hour to an hour and a half.

Films recently created by current students during a weekend challenge will also be part of the festival. While each weekend challenge team was given a different genre to film, such as comedy and revenge, the teams had the same common elements to include in the process – “a local bridge, one line of dialog, a character name and a character with a certain profession,” Kelly explained.

The only filming condition for the FloArts alumni was that their films be set in a laundromat. According to Kelly, the scripts are “very different and fun.” These films were recorded at A & B Coin Laundromat in Palatka. “They were a great supporter of us and allowed us to film at their laundromat,” said Kelly. “We’re trying to build within this, community outreach.”

The audience will also see films from four high school teams. Kelly sent out invitations to high school drama teachers throughout the state of Florida, inviting students to participate. Like FloArts students, the high school students were also assigned the weekend challenge but had a different line of dialog to incorporate into their films, along with a prop - either a swim goggle or a snorkel mask, and a particular profession.

“What I like most about teaching here is helping the students become the engines of their own creativity, the engines of their own education, and these film projects are great ways to help them take charge and help them work as a team and to not wait around for others to tell them what to do,” Kelly explained. “We’re looking forward to seeing what everybody puts together. We’re looking forward to the community coming out and supporting stuff that isn’t typical.”

The public is invited to vote for their favorite weekend challenge films. There will be two voting categories: Current FloArts students and high school students. The awards will be presented at the end of Saturday’s show, and voters are allowed to vote both days.

“Come support the students,” said Kelly, adding that the public performances are an important part of the growth of FloArts students. “A performer will always learn so much from an audience, and that’s the reason why we have public performances. We need the public to take part. They’re part of our student and teaching experience.”


PHOTO CAPTION:
A new storytelling experience, “Film Festival” (formerly “The Actors’ Project”), debuts April 22 and 23 at Florida School of the Arts. A variety of original narrative stories developed and produced on digital video by FloArts students will be featured. Pictured are FloArts acting students Terri Castelli (left) and Amanda Gazy.