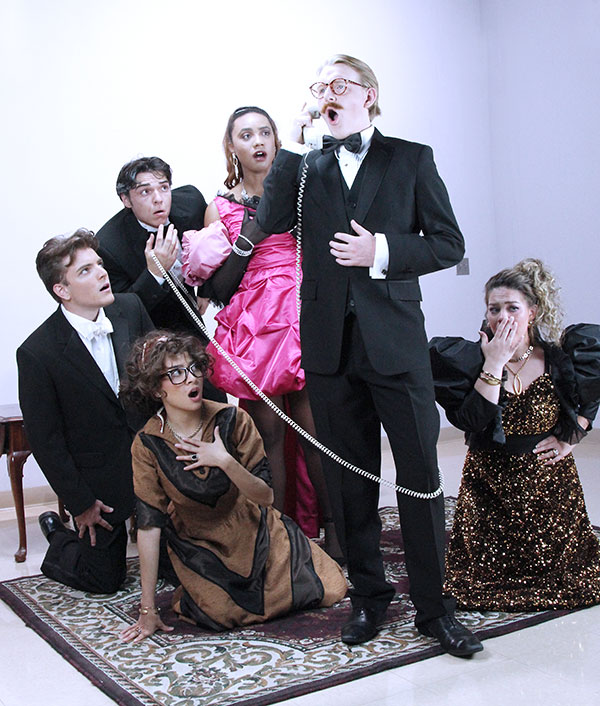 Comic complications emerge when New York elites arrive to a dinner party, only to find the host is bleeding and the hostess and staff are missing. The solution? Hide the evening’s events from the local police and the media!

“Chaos then ensues out of a series of small decisions that seemed right at the time, but then spin out of control,” laughs play director Patricia Crotty.

Florida School of the Arts presents the madcap farce, “Rumors” by Neil Simon, June 16 – 18 at 7:30 p.m. and June 19 at 2:30 p.m. on FloArts’ main stage located on the Palatka campus of St. Johns River State College. Tickets are $10. The play contains strong, adult language.

Set in the late 1980s, the play promises a fun evening of mistaken identities, cover ups and ridiculous situations. “We all just need to laugh right now,” said Crotty. “The world needs some comedy.”

FloArts acting student Padraig Kinnare plays “Lenny Ganz,” a testy, sarcastic, yet likeable accountant. Kinnare, a graduate of Nease High School in St. Johns County, said he has played many small roles since he began acting in the sixth grade; however, “Lenny” is his first leading role and he is ready.

“Every day I’m rehearsing. I’m going over lines; I’m saying them in my head in different ways, and I’m just enjoying myself… I’m putting everything I’ve learned into this, and I’m not taking anything for granted,” Kinnare said, including his “fancy” three-piece tuxedo. “It’s fun. That’s the best way to describe it.”

According to costume design and technology professor Emily Schafer, the biggest challenge in designing the show is finding a way to bring out the individuality of each character in their styling and clothing choices.

“Rumors is set in an affluent community with well-to-do society members of the late 1980s. Their style is rich, glamorous, sparkling, and they are dressed to impress,” Schafer said. “With the men all wearing formal tuxes, the small choices of accessories, details and styling are what differentiate each one. We chose looks and textures that move and come alive on stage. The costumes have to evolve with the story and communicate the individuality of each character to the audience.”

The set design for “Rumors” is based off the typical house one might find in the Palisades in New York, said scenic design and technology professor Tim Castell. “This area is well known for wealthy homeowners who enjoy their privacy, as well as those who often entertain other people of a similar socio-economic status,” Castell said. “The interior decoration resembles an older Victorian era house that has been restored and renovated to reflect a more modern aesthetic of the late 1980's. This show requires a lot of entrances and exits, along with different elevations to bolster the comedic effects of the show. Farce shows are very physical in their comedic style, so it was important to create a playing space that offers a variety of acting positions.”

FloArts serves the entire state of Florida and is part of the academic and administrative structure of St. Johns River State College. The College awards associate degrees in acting, dance performance, musical theater, stage management, theater technology, graphic design/new media and studio art. Admission is based on an audition or portfolio review, an interview with the faculty and admission to SJR State.