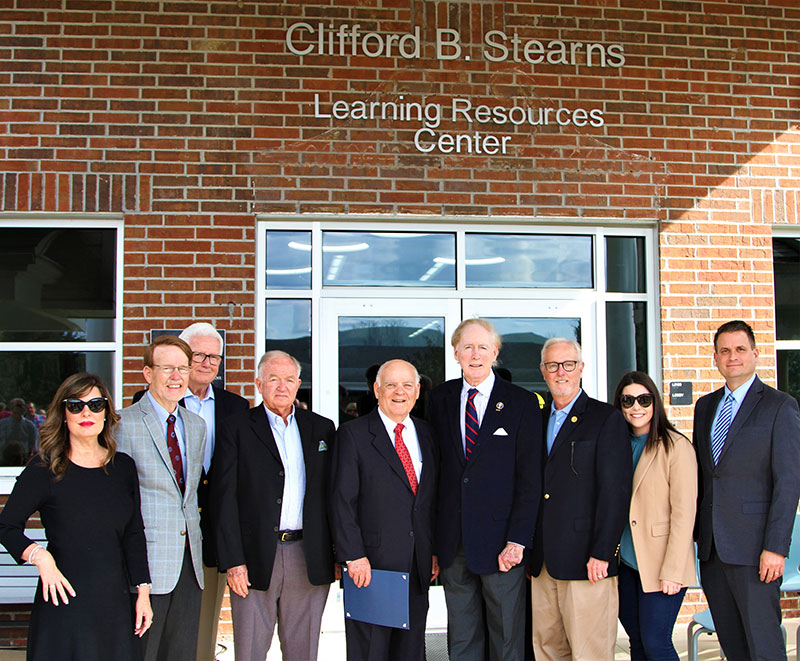 In honor of his generosity, SJR State recently dedicated its Orange Park Campus Library as the Clifford B. Stearns Learning Resources Center. Representative Stearns allocated $250,000 to aid students through scholarships and $50,000 was given to create an endowed scholarship in engineering.

Representative Stearns served in Congress for Florida’s 6th district (1989-2013) and is an executive director of APCO Worldwide’s Washington, D.C. office, where he serves as a member of APCO’s International Advisory Council.

Stearns’ commitment to Northeast Florida and to education continues to be at the forefront.

"St. Johns River State College is educating and training the heart of this community. It uniquely adapts the delivery of its programs to the needs and goals of its students, changing the path of their lives forever,” Representative Stearns said. “Meeting the needs of our communities has always been my top priority, and to be able to continue that work here at St. Johns River State College is both an honor and a blessing. Educating our citizens strengthens our democracy. An educated citizenship makes for informed voters, who are actively participating in our future as a nation. This is the key to our democracy."

Representative Stearns’ passion for growth, thought and purpose became evident to the College community when he served as the SJR State’s Spring 2022 Commencement speaker. Stearns gifted a copy of the book “As a Man Thinketh,” by James Allen, to each of the attending graduates as an inspirational token.

SJR State President Joe Pickens said the donation will make a positive impact on many students’ lives and will leave a substantial mark in the history of the College.

“We are extremely grateful for Representative Stearns’ investment in our students which will ease the college cost for many deserving students,” President Pickens said. “We’re proud to name our learning resources center after an individual who has dedicated his entire life to the pursuit of progress and advocacy.”

Congressman Stearns’ extensive career includes broad experience as a business owner, legislator, issues advocate and policy leader. As chair of the Oversight and Investigations Subcommittee, he helped increase transparency in the federal government. Congressman Stearns served as the Republican leader on the Communications, Technology and Internet Subcommittee and was chairman of the Subcommittee on Commerce, Manufacturing and Trade, where he enacted consumer privacy and data security legislation.

Congressman Stearns was a member of the Committee on Energy and Commerce and a member of the Veterans’ Affairs Committee, where he advocated for increased funding for the VA and improved long-term care for veterans. As chairman of the Transatlantic Dialogue for the European Union, he was appointed primary liaison between the U.S. House of Representatives and elected members of the European Parliament.

Prior to his election to the United States Congress, Congressman Stearns worked for CBS, Inc. and Kotula advertising company in Greenwich, Connecticut. He then started his own company as president and chief operating officer of Stearns House, Inc., which managed, operated and owned motels and restaurants in Florida.

Earlier, he was a captain in the United States Air Force and served four years as an aerospace project engineer providing satellite reconnaissance of Vietnam. He was awarded the Air Force Commendation Medal for distinguished service and meritorious achievement and later received the Air Force Association W. Stuart Symington Award, the highest honor presented to a civilian in the field of national security. He was also honored with the St. Gabriel Possenti Medallion Award and the Charles Dick Medal of Merit.

Congressman Stearns served on numerous congressional caucuses including the Chronic Obstructive Pulmonary Disease Caucus, the Cystic Fibrosis Caucus and the Congressional Air Force Caucus. Among his accomplishments as a Member of Congress, he had several prominent bills signed into law, including establishing a program of extended care services for veterans, modernizing the accelerated approval pathway for rare disease drugs, and setting a noise level to alert blind and other pedestrians to the presence of motor vehicles. In addition, he proposed several pieces of legislation concerning data privacy, spectrum transmission, and consumer product safety.

Congressman Stearns earned a Bachelor of Science in electrical engineering from The George Washington University in Washington, D.C. He took courses with Harbridge House Inc. Los Angeles on Advanced Problems in Defense Contracting and with the University of California Engineering Extension at UCLA on space communications. He is a member of Tau Beta Pi engineering honor society (formerly Sigma Tau) and Theta Tau professional engineering fraternity. Congressman Stearns is a member of the Metropolitan Club of Washington, D.C. and the Capitol Hill Club.